The State of The Race: October 5th

This week, President Trump’s already rocky road to re-election became even tougher. Last week, Ohio, eighteen votes, shifted into Vice-President Biden’s column. This week, not only did Ohio stay there, but Georgia, sixteen votes, followed suit. Due to this shift, Trump’s assumed electoral tally is now one-hundred and sixty-nine votes to Biden’s three-hundred and sixty-nine votes. Trump gained some good ground in Texas and Arizona, recovered in Iowa following his plunge last week and also moved Nebraska’s two state-wide votes and Arkansas firmly into his column. In Arkansas, the leap was quite incredible, from a lead of 2% to 16.7% in the space of only one week. Arkansas has been well-polled, so it appears as though this seismic shift in the Natural State has come about through a lot more Republican Arkansans committing to vote on 3 November. But in the two states that are absolutely crucial for Trump, Florida and North Carolina, the President lost ground, with Biden’s leads increasing by 0.8% and 0.2% respectively. Nationally, Biden’s lead over Trump increased by 0.4% this week, up to 7.6%. Similarly, Biden’s lead in Wisconsin, the probable tipping-point state, rose by 0.2%, to 6.6%.

For the second week in a row, the swing states did not move as one. Nebraska State-Wide and Arkansas ceased to be swing states as they moved firmly red. Trump also increased his margin in Texas for the fifth consecutive week, made a 0.7% recovery in Iowa and chipped away at Biden’s lead in Arizona once again, reducing it by 0.3%, down to 3.2%. This would be a good week for Trump were it not for the fact that Biden has flipped Georgia. The Peach State was once among the reddest in the nation, but suburban women appear to be shifting the dial. Female voters are crucial in this election. White women in the suburbs, many of whom are swing voters, and the turnout of black women will likely decide this election. What is unclear, at least in Georgia, is whether these two groups of women have changed their minds or have now simply decided which candidate will get their vote. But Trump’s problems go far beyond losing Georgia and failing to shift the dial in Florida and North Carolina. If Team Trump only had to campaign in a handful of crucial states, it would not be so major a problem. But they now must campaign hard in Florida, North Carolina, Ohio and Georgia and shore up support in other deeply red states. Trump’s leads in South Carolina, Kansas, Montana and Tennessee all fell this week. Across the board, Trump’s lead increased in only two states: Oklahoma and South Dakota. Even in Wyoming, the reddest state of all, Trump recorded a slight drop this week. This might seem like fantastic news for Team Biden, but it has the potential to be a drain on them in these final weeks. Team Biden is now having to go hard in states in which the Democrats have not really bothered since the days of Bill Clinton. Georgia, North Carolina and Texas are not naturally purple states. As Team Biden mobilises in these places, it is possible that they could neglect other important states in the Rust Belt and the North-East. In 2016, Team Clinton campaigned hard in states like Arizona and Arkansas, whilst not really putting in much of an appearance in the likes of Wisconsin and Michigan. The decision to do this was an important factor in Hillary Clinton’s loss. Both Team Trump and Team Biden must find a way of shoring up support in their respective safe states as well as the battlegrounds.

This week, the focus was on five states: Florida, North Carolina, Ohio, Texas and Iowa. Georgia was nowhere in the picture. Team Trump went hard in Florida and North Carolina, but the Sunshine State and the Old North State stayed stubbornly with Biden. But, in some respects, the key battleground did shift a little from these two states to Ohio. Ohio has voted with every winner from 1960 onwards, and it is essential to any Republican path to the White House. Team Trump will want Ohio back in their column. This week, Biden’s lead in the Buckeye State was halved, down to 0.5%, but, with time running out, this shift is not enough. If Ohio does not shift back to Trump’s column next week, then the President is in serious trouble. Similarly, after Trump’s lead in Iowa fell off a cliff last week, there was speculation as to whether or not Biden would go into the lead this week in the Hawkeye State. Biden did not; Trump recovered, increasing his lead to 1.5%, up 0.7%. Attention also turned to Texas, to see if a similar dramatic drop would occur there. Instead, Trump increased his lead there, also by 0.7%, up to 2.5%. As Trump’s lead in the Lone Star State has now increased for five consecutive weeks, then it is very possible that Texas, with its thirty-eight votes, may be shifting more comfortably into the red column at the eleventh hour. But if Ohio, Iowa and Texas were surprising, then Georgia was quite simply astonishing. Trump’s lead in the Peach State had been increasing week-on-week before a moderate drop of 0.3% last week. The shift from a Trump lead of 1.1% to a Biden lead of 0.4% in only a week does appear to have come out of nowhere. So unexpected is this movement, that it is possible that Georgia will return to Trump’s column next week. Georgia has not backed a Democrat since Bill Clinton in 1992, but the state has been becoming more and more purple over the last decade. It is entirely possible that this is the beginning of Georgia becoming a state that is as tight and as competitive as neighbouring Florida. Only time will tell.

Generally speaking, states that broke away to form the Confederacy during the American Civil War are today more Republican. For many years, Virginia, thirteen votes, was no exception. But the Old Dominion has not backed a Republican since 2004 and, in this election, is safely blue. Countering this is West Virginia, five votes. Cleaved away from Virginia in 1861 after the former joined the Confederacy, West Virginia was, for a long time, a blue state. It shifted dramatically red during the Reagan years and is now among the reddest states in the nation. In 2016, Trump won 68.5% of the popular vote as well as every county in the Mountain State. In short: Virginia and West Virginia have essentially swapped places. In Virginia, the reason for this lies in demographics. The state borders the District of Columbia, the most Democratic part of the country. Over time, the DC suburbs have spilled over into Virginia to the south and Maryland to the north. The north of Virginia has long been blue, but this expansion has made the state as a whole even bluer over time. Rural areas and the west of the state, out towards Kentucky and Tennessee, are still strongly red, but this is no longer enough to secure victory for the Republicans in the Old Dominion. However, in West Virginia, it is economics that explain why it is now strongly red state-wide. West Virginia is among the poorest states in the country, with about a fifth of the population living in poverty. The Mountain State is also very rural, with more than half of West Virginians living in small towns or in isolated places. In fact, West Virginia only has two cities: Charleston, the state capital, and Morgantown, near the border with Pennsylvania. All of this gears West Virginia strongly towards the Republicans. In 2016, the two Virginias moved in starkly different directions. In 2020, this starkness looks set to only become even greater. 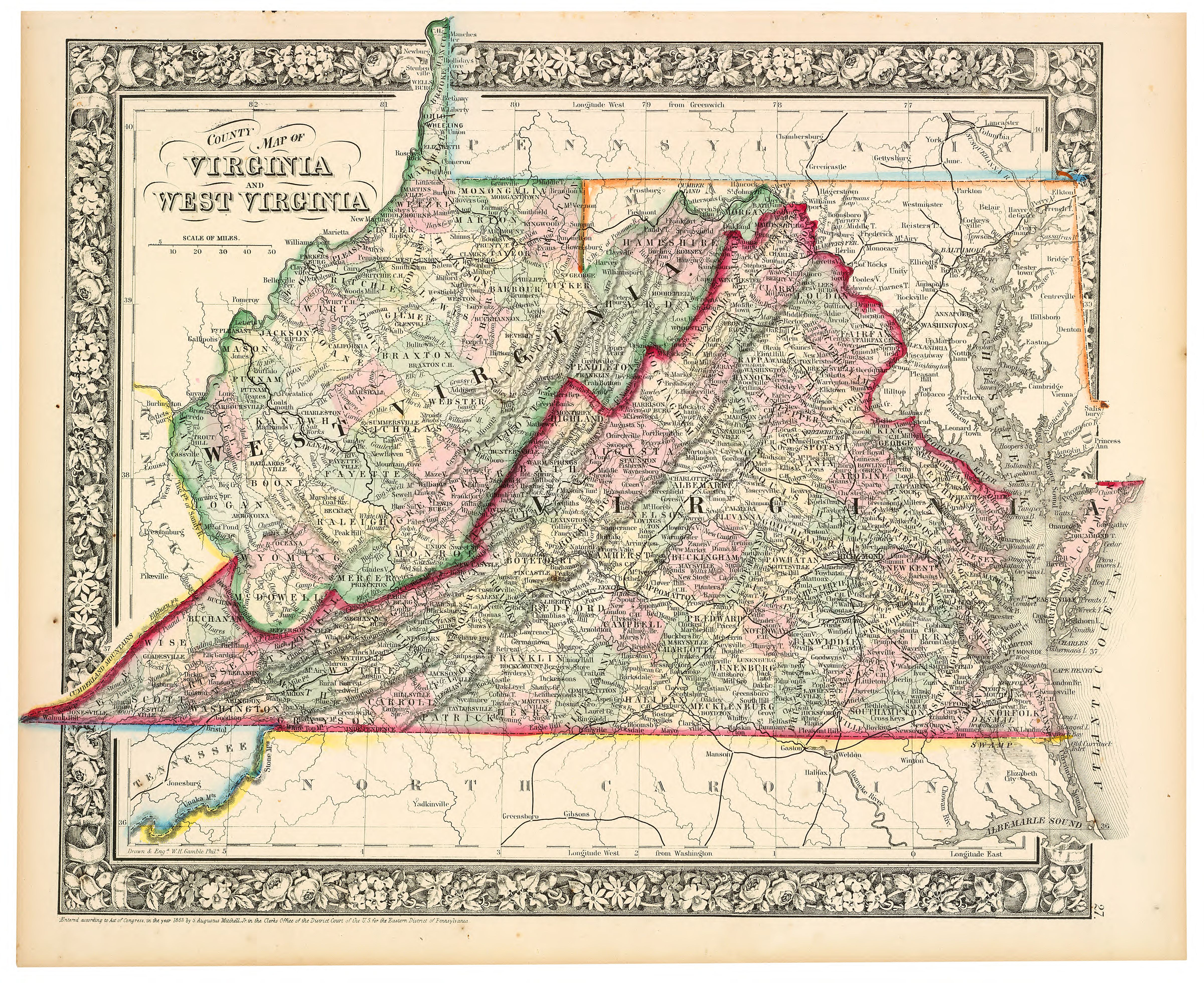 This antique map shows how the Mountain State was carved out of the Old Dominion along the line of the Appalachian Mountains. (Geographicus Rare Antique Maps/Wikimedia Commons)

This week, there were two races under 1%: Georgia and Ohio, standing at 0.4% and 0.5% respectively. Ohio is a long-standing swing state. The fact that the Buckeye State swung to Biden last week before sliding a little towards Trump again is fairly standard this close to an election. But, as has been discussed, Georgia was the real shock of the week. Both Georgia and Ohio are now toss-ups, albeit toss-ups that are leaning towards Biden. Sitting just over the 1% threshold are North Carolina (1.3%) and Iowa (1.5%). The Old North State is crucial to Team Trump, but less important to Team Biden. It is very possible that, in the short time left, Team Trump could shift North Carolina into their column. But time is precious, and Biden’s leads there have been small but consistent throughout this campaign. Similarly in Iowa, Trump has maintained small but consistent leads of between 1% and 2% throughout this campaign. The Hawkeye State has only taken on such a high-profile this week as Trump worked hard to recover his lead there. But with Trump chipping away at Biden’s lead in Arizona and with Florida still being characteristically tight, it is very possible that, as 3 November nears, more and more states become extremely tight, like Georgia and Ohio are now.

Every election has its October Surprises: the revelations that upend the race. In 2016, it was the infamous Access Hollywood tape for Trump. For Clinton, it was the reopening of the FBI investigation into her emails. As it is 2020, it seems only fitting that the October Surprises should be big. At the beginning of the week, the New York Times revealed that the President only paid $750 in federal taxes last year – and that he had paid no taxes at all for ten of the past fifteen years. This number was immediately seized upon by Team Biden and appears to be sticking in the minds of voters. Hours later, the first presidential debate got underway in Cleveland, Ohio. The debate descended into chaos as the moderator, Chris Wallace, lost control. At one point, Biden even said to Trump, “Will you shut up, man?” Later on, Trump refused to condemn the neo-fascist group Proud Boys, telling them instead to “stand down and stand by”. This drew the ire of many senior Republicans, leading the President to denounce all white supremacist groups the next day. The debate was so ugly that it will potentially lead to rule changes in time for the next one, due to be held in Miami, Florida on 15 October. Just as America was dealing with the fallout from the presidential debate like no other, it emerged that the President and the First Lady had both tested positive for Covid-19. It began on Thursday when it was announced that Hope Hicks, a close aide, had tested positive. As Team Trump continued to campaign whilst Hicks was showing symptoms, it has caused an outbreak in his administration. Kellyanne Conway, Ronna McDaniel, Trump’s campaign manager Bill Stepien and several Republican senators have all now tested positive. The President and the First Lady are said to be recovering well. Messages of support have come in from leaders the world over. Team Biden have also suspended their attack ads and have scaled back some bigger campaigning until the President is well again. A week with twist after twist came to a fitting end on Saturday morning when a bizarre recording emerged of Mrs Trump ranting about her dislike of Christmas and how she loathes having to decorate the White House each year. This week was so choc-a-bloc with events that it is very possible that there is just too much for people to absorb. As much as this week was pure pandemonium, it may actually have no tangible impact on the polls. Only next week will tell for sure.