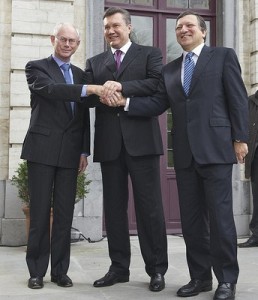 Viktor Yanukovych, the current President of Ukraine, won the 2010 elections by 3% votes over his pro-European opponent Yuliya Tymoshenko. Yet, despite being a pro-Russian figure, immediately after his inauguration Yanukovych announced his plans of Europeanization. In fact, his first official visit as President of Ukraine was paid not to Moscow, as many would expect, but rather to Brussels. Throughout this year, negotiations on the free trade agreement between the EU and Ukraine, and the desire for an association agreement were widely covered by the Ukrainian media. Almost every speech held by the President and Prime Minister was related to the ongoing reforms being carried out in order to bring Ukraine closer to the European Union. Indeed, it seems that there was never a better time for this. Hungary, holding the EU Presidency seat in January-July 2011, and now Poland, have both strongly expressed their support for the Ukraine’s bid and included EU-Ukraine negotiations on their presidencies’ agendas. However, the internal events in Ukraine in the last 3 months have worsened these negotiations. Although the technicalities of the free trade agreement have been now settled, there is much doubt that an actual treaty will be signed by all member state’s governments. 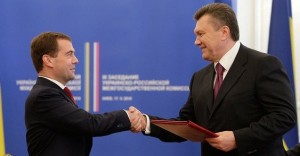 This is not surprising, considering the inconsistency of the Ukrainian government’s policy. The reforms on judiciary, social and tax laws have been met with protests that, on number of occasions, were brutally suppressed by the law enforcement agencies. The recent imprisonment of opposition leader, Yuliya Tymoschenko, for signing a gas deal with Russia which was detrimental for Ukraine, has become widely known. President Yanukovych defends Tymoschenko’s case as a fight against corruption, in which only the court, and not he himself, has a say. Nonetheless, the event has been a topic of debate across the EU; various leaders and members of the European Parliament made it clear that they would not tolerate any form of political persecutions, and would not sign the free trade agreement unless Tymoschenko is freed. Furthermore, the new laws concerning elections, proposed by the President’s “Party of Regions”, were criticized by the Venice Commission as inappropriate, and surely do not help raise trust in the action of the current Ukrainian government.

Finally, there are the unclear relations with Russia. In April 2010 President Yanukovych extended an extremely controversial Russian lease on naval facilities located in Crimea, in return for cheap gas. Moreover, on October 19th a new free trade agreement with Russia was signed in St. Petersburg. The Ukrainian newspaper “Ukrainska Pravda” (“The Ukrainian Truth”) reports of ongoing talks between the Ukrainian and Russian governments concerning a customs-union between Russia, Belarus, Kazakhstan and Ukraine. Such a union would give Moscow renewed control over its neighbors; at the same time it would make any free trade agreement between Ukraine and the EU legally impossible, since the two agreements cannot coexist.

Professor Barbara Törnquist-Plewa, head of the Centre for European Studies in Lund University and Niklas Bernsand, Coordinator at the same institution have both explained the bipolar and inconsistent behavior of the Ukrainian government as “an internal divisions between different business interests inside the President’s “Party of Regions” and people close to him”. On the one hand, there are those interested in the European markets, and on the other, those who have strong economical ties with Russia and seek total control of the population and politics. It is in fact, the oligarchs, who control the processes taking place in Ukraine by advising the President. “Ukrainska Pravda” reports that the fortunes of some of those close to the President have doubled, or even tripled, since his inauguration. According to Niklas Bernsand, these oligarchs, together with the President, are neither truly pro-European nor pro-Russian, but they are also not pro-Ukrainian. Rather, if Bernsand’s analysis is accurate, they are materialists, who will choose to promote ties with whatever party offers them the most.

Last week President Yanukovych attended celebrations to mark 200 years of Wrozlav University, where the Polish government once again stressed the importance of Tymoschenko’s release for the future of the EU–Ukraine free trade negotiations. Considering the fact that in the last month new criminal evidence against Tymoschenko was presented, it is questionable whether the Polish efforts will succeed.