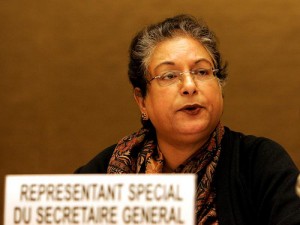 Ms. Jilani, what are the most pressing issues today when it comes to women’s rights in Pakistan?

HJ: If I was going to point out some of the issues that affect women on the day to day level, it would be violence. That is the biggest concern today, followed by societal discrimination. I think the state has not been able to adequately provide protection for women.

It is often believed that education is largely influencing women’s ability to stand up for their rights. Have you been able to notice this pattern?

HJ: Actually, here I disagree with what most people are saying. I think education is important, but the crucial factor is not necessarily education that we consider in a formal sense. It is awareness. I have seen many illiterate women who are far more aware of what their rights are than many educated women. With respect to violence, it does not matter whether the woman is educated or not. In my 35 years of experience with women who endure violence in one form or another, I’ve met all kinds of women. I don’t think women are spared either because of their socioeconomic background or because of their education. Therefore, I think the crucial factor is awareness and the ability to believe that there are ways of protecting women.

Which sectors of society are the most active when it comes to the promotion of women’s rights in Pakistan?

HJ: Over the years, I have observed that a number of actors and groups that are working on women’s rights have certainly increased. I also can say that Pakistan has a very vibrant civil society and the women’s movement is a very strong one. A lot of advancement that we have made is because of them. They have been able to expose a lot of social trends and practices that are resulting in violence against women as well as discrimination and inequality. One of the more recent areas in which a lot of work is being done is providing protection for victims of violence in the form of shelters and crisis centers. A very important campaign has been launched called “Protection with Dignity” which means that while there are governmental and non-governmental institutions, there are no standards of treatment for women in distress.

And what about the political elite? Do you think enough attention is being paid to the issues of discrimination?

HJ: I don’t think enough attention is being paid, but because of the women’s rights movement, women’s rights have become an important part of the political discourse in Pakistan. A few years ago we introduced a good amendment to the Constitution that now allows a certain number of seats in Parliament to be reserved for women. In the beginning we were very skeptical whether these women would make any difference. I am happy to say, that to a large extent, they have made a difference. The 2010 Report of the Human Rights Commission on the state of Human Rights in Pakistan found that the majority of human rights-related legislation has been proposed by the female members of Parliament. But I wouldn’t say that a particular politician at a very high level is promoting women’s rights.

HJ: The very creation of the Taliban regime affected women’s lives in Pakistan much more than their fall did. There was a deliberate attempt to foster Islamic extremism and fundamentalism in that region by the international community and Pakistan’s old military rulers. The goal was to create a force of fanatics to fight the Soviets in Afghanistan. That particular strategy was the most harmful initiative that anybody could have conceived and has had a very long-term negative impact on the region. Today, Pakistan is suffering consequences of this and, in particular, Pakistan’s women. The non-Muslim population in Pakistan today is also threatened. Until the time the problems in Afghanistan are resolved, Pakistan is likely to suffer.

Thank you Ms. Jilani for this interview, one last question is rather personal. Despite the threats to you and your family you continue to fight for women and other human rights not only in Pakistan but all around the world. What drives you to continue your work?

HJ: I live in Pakistan; I want this country to have a certain level of civilization and human rights values, I want a country where my children will feel safe. So I do this work for my own personal survival and human rights activists like me feel the same. We want to live in peace, in the environment that presents a better future for our children.