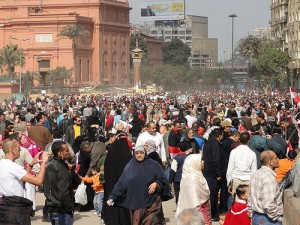 After the revolutions demonstrators were faced with the question of what they want to change. In both countries the answers to this question were namely: justice, freedom and democracy, but on the population’s own conditions.

The Tunisian President Zine El-Abidine Ben Ali resigned in January after having ruled for 23 years. As an aftermath of this, a lot of resignations and strikes occurred, and new governments were formed.

Finally, on October 23 the Tunisian population went to vote in the election. In this election more than 100 political parties were registered, and in proportion to the country’s 10 million inhabitants, about 10.000 candidates competed in the elections. The people elected the 217 members of National Constituent Assembly who will be responsible for formulating a new constitution, a task which may approximately take one year to complete.

The recent election was won by the Islamic Party, An-Nahda, the once-banned but now the most-well organised party in the country, securing 41% of seats. They have promised to build a Western democratic system in accordance with Islamic tradition.

Most Tunisians are satisfied with the results of the election, but there are many who are worried that the rule of the new government might not lead to a path of democracy. Since elections are to be held next year for a proper parliament, An-Nahda’s government will probably try to do everything in their power not to lose their voters. 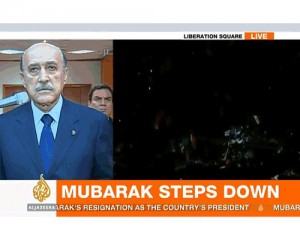 Aljazeera on February 11th. Hosni Mubarak steps down. Photo: it is on. flckr

On February 11, Vice President Omar Suleiman announced that Hosni Mubarak’s 30-year regime had ended and he turned power over to the Supreme Council of the Armed Forces (SCAF). SCAF leaders have always been an integral part of the old regimes and the organisation controlled a significant proportion of the Egyptian economy.

During the Revolution, the demand for Emergency Law was a key point. The SCAF promised to lift it by September 30 but later postponed the date to June 2012, which generated much protest. The Emergency law has, ever since 1981, been used as a tool by executive power to circumscribe the population’s human rights.

In September, a video of a policeman and army persons, who tortured two prisoners, was spread on the internet. In October, a 24-year-old man was tortured to death by prison guards. In both cases the principals found out innocent.

27 Coptic Christians were killed and 300 were wounded by the military force when they demonstrated peacefully against the burning of a church in southern Egypt while state channels televised news of Copts attacking soldiers. These situations show the unrestricted executive power of SCAF which controls the people and censors the media.

SCAF promised a quick, six-month transitional period to democracy but they have governed since February. The period of military rule can go until 2013 depending on the outcome of the elections. Surely, SCAF is not the only part in this situation, who attempts to reach democracy. Not everybody wanted Mubarak to resign and there are still people who are loyal to the old regime. For instance corrupt businessmen fear to lose their wealth and members of the National Democratic Party are not willing to participate in the new era that arises. These people’s aim is a counter-revolution, in order to bring back the former rule.

Egyptian Parliament consists of two chambers, the lower and the upper houses. They will start the legislative elections for the Lower House; the People’s Assembly in three stages in the end of November until January and then the Upper house, the Shura Council elections run from January to March. Moreover, the two chambers will draft the constitution together and they will further on hold a referendum about the constitution. Finally the presidential election may continue on to 2013.

Egypt’s largest and oldest political organisation, the Muslim Brotherhood has the greatest chance to win the elections, but it was banned from political activity under Mubarak’s regime. In June, the party was recognised as the “Freedom and Justice Party”.  Issam al-Aryan, member of the Egyptian Muslim Brotherhood’s Guidance Bureau and the vice president of the Freedom and Justice Party said that their aims are “…civil state, based on Islamic principles – a democratic state, with a parliamentary system, with freedom to form parties, press freedom, and an independent and fair judiciary”.

A radical, Islamist organization, the Salafist has also formed two political parties. Salafist has sufficient support, particularly in rural areas-where people hold more traditional views and often lack an education. Instead many of them believe in creating an Islamic state governed by Sharia law as in the 7th century.

One may also ask how the Western world has influenced these processes that have taken place during ‘The Arabic Spring’. First of all America has never had any issues concerning Mubarak’s leadership. They supported his government with approximately $ 2 billion in U.S aid annually to preserve the peace with Israel as well as selling military equipment to Egypt. Secondly, the G8 countries agreed to support Egypt and Tunisia with a 20 billion dollar loan and grants, stretching over the next three years.

The European Parliament was also represented in Tunisia by 130 people to help out during the elections and it offered to assist to Egypt as well.

Is Pride Worth Its Price?