The story of a beverage which created a societal bridge, brewed revolutionary ideas and started a consumer revolution. 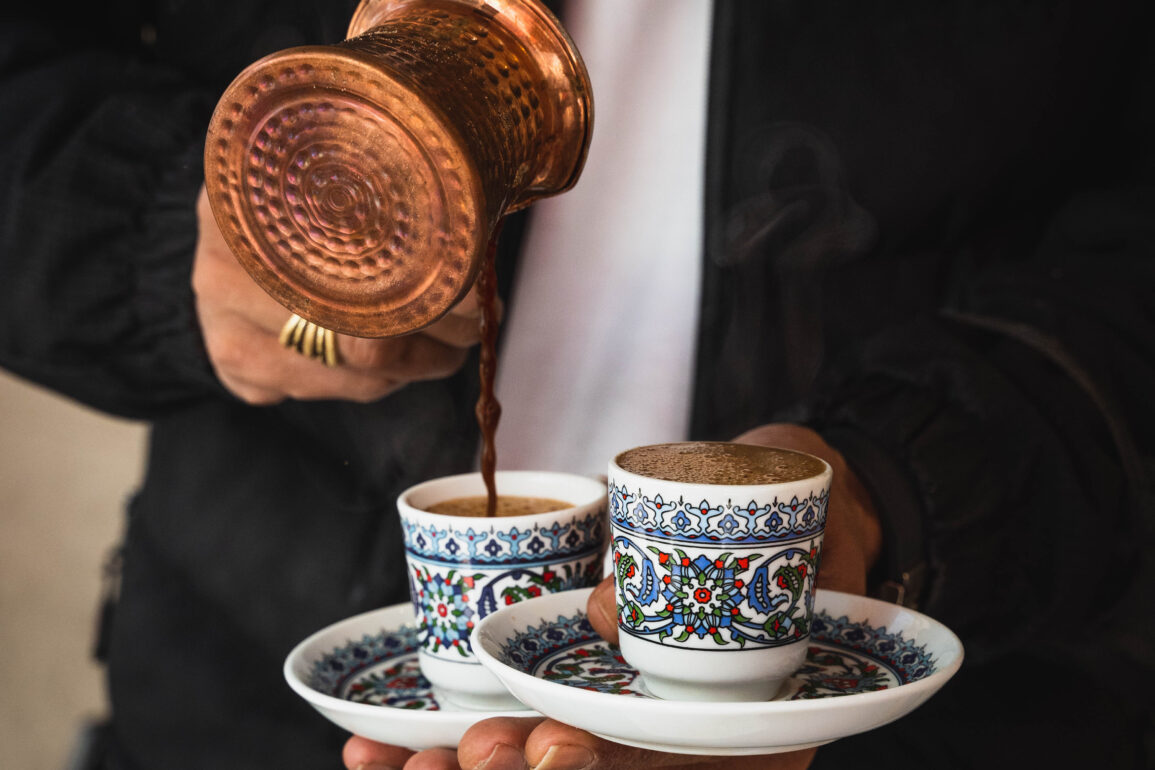 Turkish coffee is a traditional coffee-brewing method in which ground coffee beans are mixed with water and heated just below boiling inside a cezve. This technique makes the coffee frothy, thick, and strong. Due to its bitterness sugar is often added in the brewing process and coffee is often served with sweets to complement it. (Credit: Helene Witte)
Home
Articles

Walking through the streets of Istanbul with coffee shops on every corner, one cannot help but wonder, why is coffee such an important part of Turkish culture? And how has this coffee culture shaped society?

The coffee plant, a bush or tree, first grew wild in the plains of present-day Ethiopia. The berries were discovered to have refreshing and invigorating properties. In the fifteenth century, coffee plants were grown commercially in the Arabian Peninsula, with Mocha emerging as the main centre of coffee production and trade. In the sixteenth century, coffee spread to Persia, Syria, Egypt and Turkey. The first coffeehouse opened in 1555 in Tahtakale, Istanbul under the rule of Suleiman the Magnificent (1520-1566). At first served in the palace of the sultan, the interest in coffee rapidly spread, and by the end of the century there were already over 600 coffeehouses in the capital.

Alcohol goes against the teachings of the Koran, which meant that Muslims did not go to taverns to socialise.The advent of coffee brought about a new form of socialisation. Although coffee consumption did not go against the Koran, some religious leaders still forbid its consumption due to its stimulating and addictive nature.

Society was divided by religious affiliation, which meant that Muslims and non-Muslims gathered in separate social spaces. Coffeehouses became Muslim establishments where non-Muslims were unwelcome, while in Ottoman Istanbul, taverns were the “dirty” places which non-Muslims frequented. In contrast to the taverns, with their wine, gambling and loose women, coffeehouses were considered more intellectual arenas. Here Muslim men could meet, play games, have lively discussions about daily life and politics, or recite poetry. The military elite could also discuss rumours, news, and war.

Coffeehouses were meeting points for people from different socio-economic backgrounds. According to Dufour, a 17th century writer, Turks “seldom took their coffee at home, preferring instead to frequent the coffee shop.” Coffeehouse culture was characterised not only by social life, it was also a political scene and information exchange. The relaxed environment, where social hierarchy and class divides were largely dissolved, attracted customers to the coffeehouses. On the one hand, this allowed for interaction between people who might otherwise never have formed connections. On the other hand, however, the authorities were suspicious of such mingling. They were concerned that it would have a negative impact on social cohesion and order, which could in the worst case even lead to revolutionary ideas and rebellion.

IV. Murad, who was the Sultan of the Ottoman Empire  from 1623 to 1640, also had concerns about the new drink and his apprehensions were not at all unfounded. Coffee was very cheap, yet its slow preparation and hotness meant that it provided the perfect setting for long conversations. People from different layers of society could discuss for example the religion, the transgressions of the upper ten thousand, or even the leaders of the empire. Therefore, the Ottoman rulers were quick to close the coffeehouses whenever there was any sign of unrest.

In 1633, IV. Murad banned coffee drinking, along with the consumption of tobacco and opium. Those who didn’t obey the regulations were sentenced to death. He went around town in disguise to expose transgressions, and according to some legends he even cut off the offender’s head himself. However, there were also a great number of people who defended coffee, and the ban was soon reversed. The most prominent defender of coffee was Bostanzade Mehmet Effendi, one of the most important ecclesiastical persons in the empire, who even wrote a poem in defence of coffee.

With the expansion of the Ottoman empire, coffeehouses spread into South-Eastern and East-Central Europe during the sixteenth century. Travellers from Western Europe – merchants, explorers, ambassadors and others – encountered the coffeehouse culture there or in the Levant. Venetian traders brought “Turkish” (actually Arabic) coffee to Venice, where its consumption spread quickly among the elite. And from the early seventeenth century, the European East India Companies brought quantities of coffee from Arabia via India or South-East Asia to Western Europe, circumventing the Ottoman empire.

Coffeehouses spread to Malta through Turkish Muslim slaves. From 1669 onwards, Sultan Mehmet IV had an ambassador in Paris who served Turkish coffee to his visitors. The first coffeehouse that was not under Turkish control opened in Venice in 1645 followed by London in 1654, Bremen in 1673, and Vienna in 1683. The first one in Berlin was opened in 1721. In Hungary, after an initial resistance to the “black soup”, the first coffeehouses in Pest opened only in the beginning of the 18th century. Although the Ottoman Empire declined from the 17th century onwards, they left behind the love for coffee and with that a culture that is present to this day.

There was some doubt in Christian societies about “the devil’s coffee”, which the Muslims were drinking. But in 1600, Pope Clement VIII stopped a proposed ban on coffee, allowing Christians, or at least Catholics, to drink it with a clear conscience.

Towards the end of the seventeenth century, coffee was well known in most of Europe, and in the eighteenth and early nineteenth centuries, it percolated down through the layers of Western society. Coffee became a significant commercial product, heralding an early consumer revolution, along with other global products such as sugar, tea, tobacco and cotton fabrics.

The combination of sugar and coffee or tea was significant for the popularity and spread of these drinks. They provided both “pick-me-ups” and calories in easily consumable forms, not least for the labouring population.

Coffee also made its influence on the arts. Coffee drinking both in coffeehouses and in private homes were portrayed in paintings and drawings in many countries. Johann Sebastian Bach wrote his “Coffee Cantata” in 1734, on the conflict between a coffee-loving girl and her stern father, who tried – in vain – to forbid her the fashionable drink.

In 1720, coffee production began in the French colony and Saint-Domingue (Haiti), on plantations based on slave labour from Africa. From there the production spread, first to Cuba and later to Brazil, Colombia, Guatemala and Nicaragua. In North America, after the Boston Tea Party in 1773, American patriots preferred drinking coffee instead of tea, which was a British monopoly.

In just a few hundred years coffee has swept the world off its feet and become part of the daily routine of many people. As of 2013 Turkish coffee culture and tradition is part of UNESCO’s of Intangible Cultural Heritage of Humanity, recognizing not only its special preparation method, but also the intrinsic communal culture that surrounds it. Although much has changed since the rule of the Ottoman Empire, coffee shops remain one of the main meeting points for relaxed socialisation and lively discussions.