1 month ago
ActivismArticlesIranUncategorizedUPFWomen Peace and Security 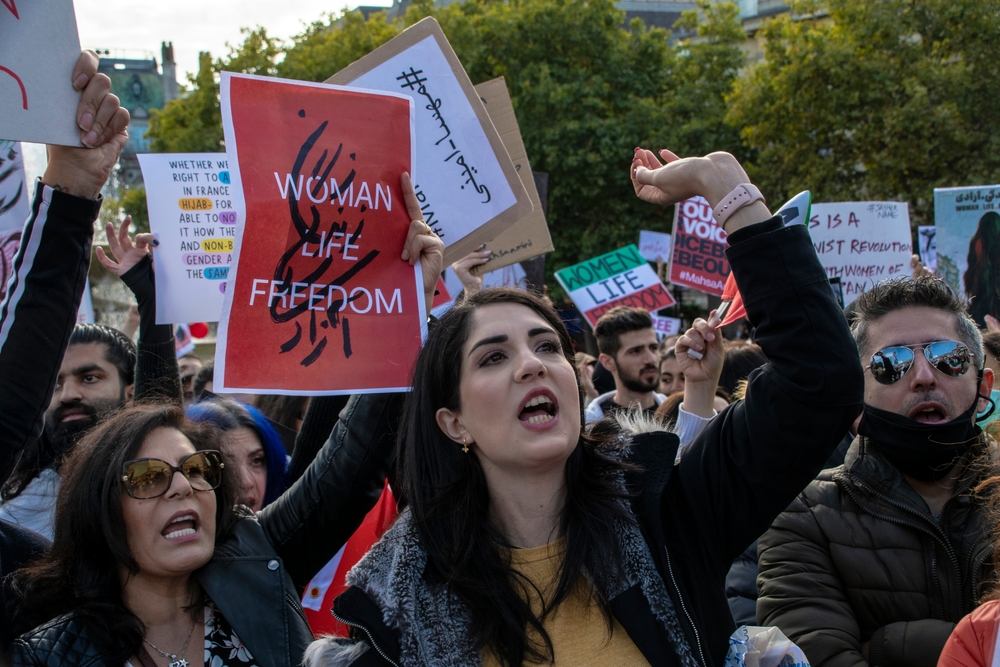 One of the worldwide protests for women's rights in Iran © Koca Vehbi / Shutterstock.com
Home
Activism

I would like to call this a revolution rather than a demonstration.

The ongoing protests in Iran, triggered by the killing of 22-year-old Mahsa Amini on September 16 by the Iranian morality police have taken the nation by storm and grabbed the attention of the international community. Amini was held in morality police custody when she lost her life, for having worn her head covering too loosely. This took place and continues to happen in an environment of the Islamic theocracy, which defines Iran’s political system since the Iranian Islamic Revolution in 1979. Paradoxically, now we are seeing a revolution of that revolution.

Today, the Iranian youth is protesting against that very theocracy. The protests emerged as an immediate response to Amini’s killing. Young men and women are fighting the strict system imposed by the Iranian Islamic Revolution in which little respect is given to human rights and the individual rights of women to decide whether to wear a hijab or not, or to determine the details of how exactly they chose to express their faith in their daily lives. Nevertheless, the protests symbolise something much deeper than this, an internal revolution and resistance to the wider oppression felt by the people of Iran.

As of now, hundreds of protesters have already been detained by the Iranian police, and more than 200 have died in the protests so far, which take place at night mostly in the streets of Tehran. Revolutionary phrases spoken in the protests that got turned into songs have led to musicians being arrested. With time going by, Iran’s women have escalated their exhibition of protest against this unjust violence against Amini by burning their hijabs. With the growing protests, Iran’s president Ebrahim Raisi vowed to crack down on them, and consequently, the capital’s internet access was shut off. This is just one of the many techniques used by the Iranian regime to drown the voices of many women fighting their own battles to achieve feminist goals, that here in the West are many times taken for granted, some examples of which are freedom of expression and freedom to religious identity. After all, technology and social media can be powerful tools to shape public opinion, give voice to the otherwise voiceless, and assist the protests to gain momentum into a perhaps even larger revolution to reform the system.

It is important to understand that this is not a fight against religion, but rather a fight to have a more progressive and equal society. A society that gives women the power and liberty to take their fate into their own hands rather than punishing them for their chosen way of expressing their religious beliefs and the way in which they live their daily lives. That being said, in the 1960s, before the Iranian Islamic Revolution, women in Iran had the right to not wear a hijab if they did not want to. This was one of the consequences of the preceding Iranian Women’s Rights Movement that also gave women the right to vote.

In conversation with a young Iranian

Disclaimer: Any opinions expressed in the following interview belong solely to the interviewee and do not represent the views and opinions of the author, the editorial staff of The Perspective, or UPF Lund.

As an attempt to raise awareness in the West about what the Amini Protests actually symbolise, I spoke with Sina Mohseni. The young Iranian currently lives and studies in Sweden, and has been involved in, as well as orchestrated similar Iranian protests in Tehran in the past. The interview shows us exclusively the point of view that most young Iranians stand for in the ongoing Amini protests.

I asked him to describe the protests–how exactly they started and what kind of messages they symbolise in his view as a young Iranian. Sina, who sees the current protests as not idiomorphous, but as another symptom of a long history of a wider and diffused societal movement of demonstrations over time, replied:

“At first, I would like to call this a revolution, rather than a demonstration. If we want to take a deep look at these protests, we shall see that they have their roots in even the last revolution of Iran, which was wrought by freedom, independence, and the Islamic Republic. Iranians had some huge protests on June 15, 2009, challenging the presidency of Ahmadi Nejad. These were followed by the November/December 2017 protests about inflation, and several more up to now. However, these latest demonstrations were started alongside feminism. Many might even relate it to Dokhtare-Abi.’’

Here, Sina is referring to the girl that set herself on fire because she was not allowed into football stadiums to watch her favourite team, which is also known as Iran’s ‘blue girl’. The girl, whose real name is Sahar Khodayari, attempted to enter the football stadium of her favourite team to watch a Champions League game, disguising herself as a man in the process. The security guards identified her and arrested her for violating the prohibition of an only male audience.

“I personally find myself responsible for the events of the Azadi ‘Freedom’ stadium. Between the years 2014 and 2019, I was a leading fan for FC Esteghlal and took the first girl to Azadi stadium after the revolution. I am referring to the Esteghlal football fan club which did self-immolation as a result of not letting women into the stadium. When the girl put makeup on herself to look like a boy and they found out, they put her in jail and called her a criminal.

“Later on, in 2022 on September 16 a revelation started. A girl called Mahsa Amini also known as Zhina died as a result of head injuries which were given to her by the Morality Police of the Islamic Republic. Mahsa had come to Tehran with her family and as a result of not wearing her hijab in the way that the Islamic Republic wants people to wear, she got beaten and forced to take religious discipline classes. [To explain her death] the Islamic Republic regime alleged that she had had a heart attack. However, it is quite obvious that they killed her. Denying and lying about incidents like this one, and even the case of the protests following the Ukraine International Airlines Flight 752 being shot down ‘unintentionally’ by the Iranian government on January 8, 2020, has made the regime unstable and unworthy of the trust of the people.”

The specific case of the plane of Ukraine International Airlines being shot down that was mentioned, was a shocking event not only domestically in Iran but also to the international community as a whole, as videos of the aircraft being shot down were later on uploaded on the internet. Ever since, there have been more and more critics challenging the Iranian government and its actions.

“Nowadays Iranians including youngsters are going to the streets in every city of Iran, and most capitals and biggest cities of the world, saying ‘women, life, freedom’. That is exactly what these protests symbolise.’’

All in all, it can be said that these protests hold an immense emotional and symbolic significance for a more progressive future for the younger generations, who envision and crave a more modern, free and socially harmonised Iran. For many like Sina, who are passionate to see this vision come true, these protests are a breath of oxygen after years of suffocation. The protests are continuing now, well into the one-month landmark, as more and more schoolgirls of younger ages are also joining their voices with the Amini protesters. Could this be the potent spark that lights the fire which finally burns down these social inequalities against women, and gives space for a feminist and humanitarian change to occur in Iran’s problematic political system?