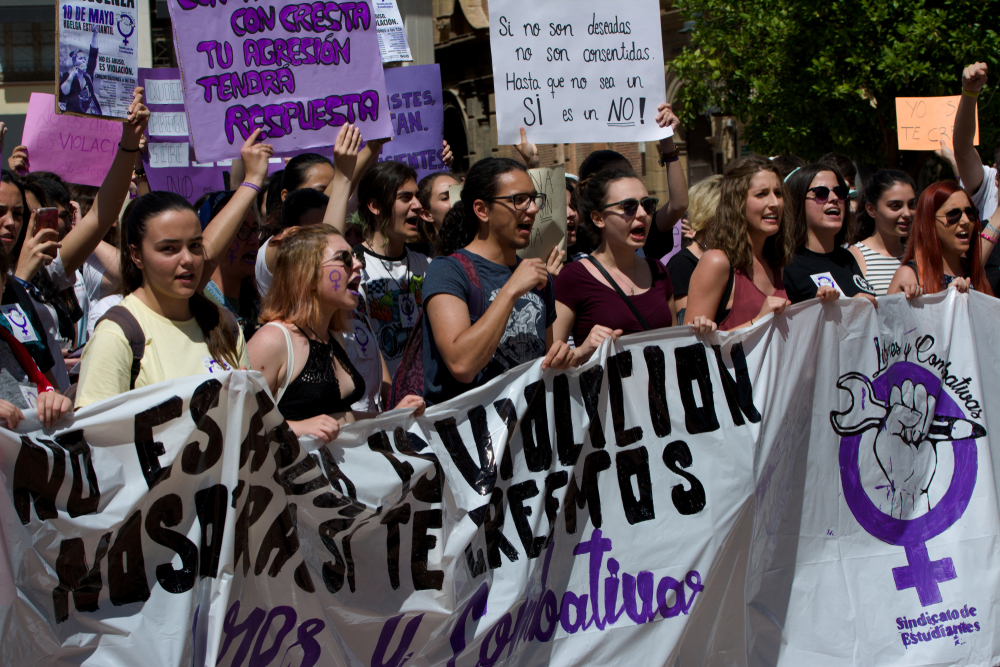 After six years of protests and eleven months of legislative procedure, Spain finally passed a new law on sexual abuse and violence. It is known as the “solo sí es sí” (“only yes means yes”) law and can be considered one of Europe’s most progressive sexual violence laws. The legislation places consent at the pivotal point of sexual violence, something which has long been demanded by feminist movements.

With 205 votes in favour and 141 votes against, the new law was passed on Thursday, August 25 2022, in the Spanish lower house. The head of the Ministry of Equality Irene Montero attributed this final breakthrough to the efforts of the feminist movement and victims of sexual assault. She celebrated the passage of the law as a “day of victory after a long fight”.

This is not my law, it is the law for all women.

Six years ago, Spain was shattered by a hideous sexual assault case. In July 2016 an 18-year-old woman was raped by a gang of five men, one of which was a Civil Guard, at a festival in Pamplona in northern Spain. The offenders themselves recorded the attack on their phones. The recordings show the men repeatedly sexually abusing the unresponsive women. Yet, the offenders were only charged with sexual assault, not rape, as the prosecution could not prove that any form of physical violence was used on the victim. Subsequent protests on the street set off a political debate on sexual violence. The previous Spanish legislation required the use of violence for the crime to be considered rape. Feminist movements all over Spain called for stricter and consent-based sexual violence measures. After the “only yes means yes” law was passed, the victim said in an interview: “this is not my law, it is the law for all women”.

Consent can only be considered consent when it has been freely manifested through actions that, in accordance with the circumstances, clearly express the person’s wishes.

The new law requires clear consent of all parties involved, otherwise the act is considered rape. Still, this confirmation does not necessarily need to be verbal: according to the law,  “Consent can only be considered consent when it has been freely manifested through actions that, in accordance with the circumstances, clearly express the person’s wishes.” While the requirements for legal sex are theoretically clear, it remains to be seen how judges will interpret action-based consent in the future.

Another addition is the increased punishment of consent manipulation through chemical submission. The involuntary drugging of victims by sexual violence offenders to manipulate the consent of the victim has long been a big problem in Spain. Incidences of chemical submissions have increased severely over the last years. In the last five years, around 33% of sexual abuse crimes have been conducted while the victim was under the involuntary influence of substances. In the last few years ‘needle spiking’ attacks, meaning the injections of substances without the victim’s consent, have increased. Only recently, The Ministry of Justice warned Spanish citizens about chemical submission attacks and announced investments in more resources to fight these crimes. In many parts of Spain, visitors of festivals and nightclubs are now warned to be extra careful.

While consent is the essence of the law, punishments for many different kinds of sexual assault are also elevated. Digital sexual violence such as pornography without consent as well as sexual harassment in the streets will face higher penalty. Furthermore, victims have the right to economic support and the network of support hotlines will be extended.

With its new law, Spain joins the other 12 out of 31 European countries who consider sex without consent to be rape. This was revealed by an Amnesty International  study at the end of 2020. However, most European countries, among those Spain’s closest neighbours France and Portugal, require some sort of violence and coercion for the crime to be considered rape. It is important to note that rape does not always involve physical violence as women are often abused by a close friend or partner, or freeze due to a shock reaction.

The new Spanish law therefore specifically manifests that sexual actions without consent are always rape, no matter if violence is involved or not, or if the offender is a stranger or a partner. This is not the case in all countries: in Hungary, for instance, intimate partner violence is not even directly considered a criminal offence. Hungary, as well as other European countries such as Poland or Slovakia also refused to ratify the Istanbul Convention. This in 2011 enforced multilateral agreement aims to prevent and combat violence against women in general and domestic violence specifically. The Hungarian government argued that the Convention promotes “gender ideology” which threatens their traditional family values.

The question of how to define and legally prosecute rape seems to be heavily influenced by culture, ideological beliefs and mentalities within a country. Additionally, many countries have laws that are unclear regarding the definition of consensual sex. Professor Carmen Ruiz Repullo, a Spanish sociologist specialising in gender-based violence, says that legislation should specify what she calls ‘positive consent’. She says that “consent is never neutral” and can never be given solely by a lack of ‘no’. In her view, consent means clear affirmation, which changes “no means no” to “yes means yes”. To achieve a change that goes beyond the legal system, the law furthermore makes education on consent and sexual violence compulsory in the public schooling system.

Supporters are now hoping for the law to have implications within as well as outside Spain’s courtrooms and change people’s behaviour both on the streets and in their homes. The clear statement that the legislation entails can change awareness of sexual violence not only in Spain but in all over Europe and the world and thus keep women safer in the future.

Caught in the Borderlands: Judicial border disputes in Africa