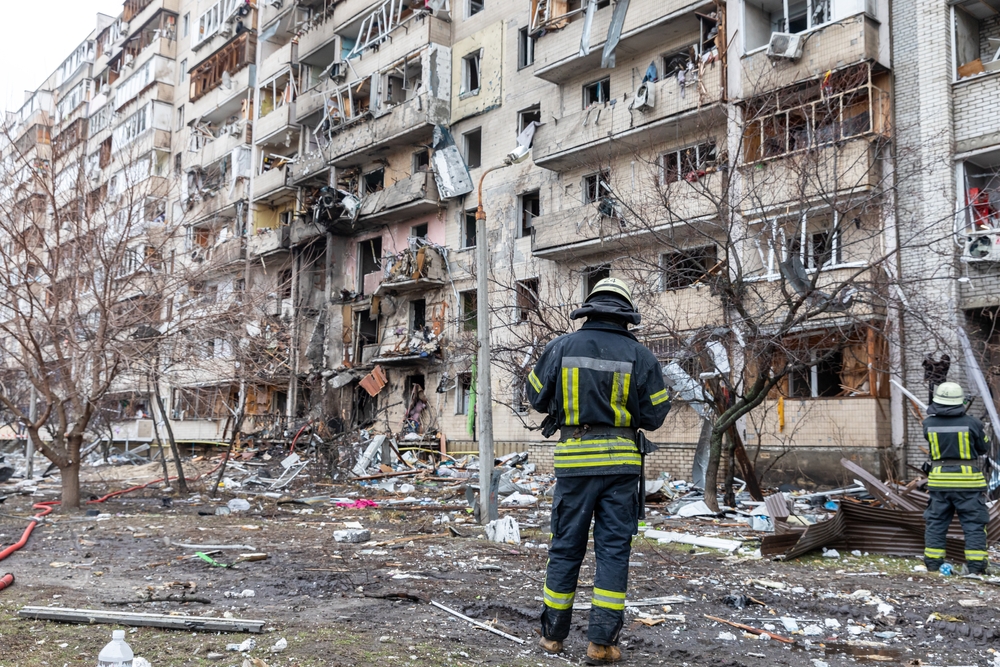 The history of the conflict between Russia and Ukraine is long and complex, but one thing is clear: this war evolved into a severe humanitarian crisis with grave consequences. The exodus of refugees in Ukraine is unlike anything the European continent has seen since the end of the Second World War. The fluidity of the situation means that as the war rages on, the humanitarian crisis deteriorates.

Looking at other humanitarian crises worldwide, we can see that many continue to worsen, bringing about severe distress while armed conflicts and violence push people into suffering. Among the most affected countries are Yemen, Afghanistan, and Ethiopia, to name but a few. In 2020, about 82.4 million people were forcibly displaced worldwide, up from 79.5 million in 2019.

Eastern Europe became the stage for the most recent violent escalation. The Russian Federation has built up tensions with its neighbours through provocative military activities around the world: in the Baltic, the Caucasus, the Arctic. In recent years, Russia’s President Vladimir Putin has been continuously isolating his country from the West and abstaining from diplomatic agreements with the rest of the world. Now, he broke international law by invading Russia’s western neighbour Ukraine. He did this without provocation and with absolute disregard for Ukraine’s sovereignty.

Russia and Ukraine have had an ongoing conflict for many years. The situation first came to a head in eastern Ukraine in 2014 leaving a dramatic impact on the locals. War has been an ongoing event for people living in the provinces of Donetsk, Luhansk, and during the annexation of Crimea. Those living close to the frontline have been experiencing fighting, destruction, and civilian fatalities for years. More than 4.4 million people have been affected by the conflict since 2014 up until the recent invasion. In 2018, Ukraine ranked fifth worldwide in the number of casualties linked to landmine deaths, due to the presence of unexploded munitions.

Donetsk and Luhansk have since proclaimed themselves to be “Republics”, but have remained unrecognised on the global arena. Over the last months, tensions have been increasing. Russia relocated a considerable number of troops near its borders with Ukraine and Belarus. Since the beginning of the year, people have started to prepare for a larger conflict and for increased violence.

An example of this are meetings organised by the European Commission about scaling up funding and preparing for the increased need for humanitarian aid. Different scenarios were sketched up about potential outcomes. Back in January, a full-scale invasion of the whole of Ukraine seemed unlikely. On 21 February 2022, the two pro-Russian separatist areas, Donetsk and Luhansk, were officially recognised by Putin. Shortly after, the two regions publicly requested military and political support from the Kremlin. Putin used this as a justification to attack the Ukrainian people on a large scale. His so-called “special military operation” was an all-out war on Ukraine. The invasion has resulted in attacks on the civilian population and military targets through brutal violence and bombing. Putin’s war on Ukraine is a war on humanity, democracy, freedom, and human rights.

The NGO Polish Humanitarian Action (PAH) has been actively working in the east of Ukraine since 2014 and therefore has great experience in the context of the conflict. For months, this humanitarian aid organisation has been preparing for potential shifts in the Russia-Ukraine situation, but the war still came as a shock. On 24 February, it started an immediate response to the internally displaced Ukrainian refugees also at its border with Poland as one of the first humanitarian responses on the ground.

On the first day of Putin’s invasion and attacks on Ukraine, PAH gave several interviews to major Polish news channels, giving an overview of the current humanitarian situation and the needs of Ukrainians. In Gazeta Wyborcza, a major Polish newspaper, PAH claimed that the primary need is to save lives and to help people as fast as possible. This also heavily depends on donations and their funds. As many people are already fleeing and more are expected to follow, humanitarian organisations will aim to provide for basic needs at the border and—if possible—within Ukraine. Food shortages and a lack of resources started to become visible already within the first days of the invasion. The UNHCR has already categorised the crisis as their highest level of emergency for humanitarian crises.

Aid organisations expect that a large number of people will have to flee from their homes because of the conflict. However, not all have a car to move, commercial flights are impossible, roads are blocked and other transportation means are overcrowded. This leads the poor, elderly, weak, ill, and disabled to be left behind, creating even more demand for humanitarian aid within the country’s borders. In Ukraine, a country rife with conflict, this will be very difficult to provide.

Dramatic numbers of refugees are coming to Ukraine’s neighbouring countries and they are still expected to increase. At the time of writing, almost 4 million refugees have fled the country since 24 February, millions have been internally displaced. For now, countries like Poland or Slovakia have been welcoming, providing shelter and help for the Ukrainian refugees in need. Railways and public transport are free of charge for Ukrainian people in many European countries. Refugee flows will, however, not end at the Polish border: Ukrainians will have to seek shelter wherever they can or with family members across Europe.

Many people have started gathering and collecting monetary and in-kind donations, which reach the border regions in order to help the refugees as much as possible. Some reporters have found “nothing but humanity” at the stricken Ukrainian Polish border.

It is impossible to understand the long-term impacts this conflict will have on the countless people affected. The number of fatalities in the war will increase immensely both within the military forces and the civilian population.

It should be noted, however, that also within Russia, civil society has been in uproar against the government’s war. These protests have mostly been suppressed and the government responded with arrests and violence. Between 24 and 28 February 2022, approximately 6.500 peaceful protesters have been arrested in Russia, according to OSCE, the Organisation for Security and Cooperation in Europe. The numbers are steadily increasing, as the Russian government continuously implements more restrictive policies and prohibitions. Putin is further censoring freedom of the press and speech, taking repression to a new level. The Kremlin blocked major social media platforms while many Russian people try to find a way around it and aim to receive news from outside the government’s propaganda.

Since the beginning of the war, death and injury rates have risen tragically. Mass destruction of Ukrainian towns and infrastructure by the Russian military worsens the suffering. The negotiation over the establishment of humanitarian corridors to evacuate major cities has repeatedly failed. People worldwide are asking the question: how far will Putin go?

What you can do if you want to help: find out by reading our earlier article on this topic.