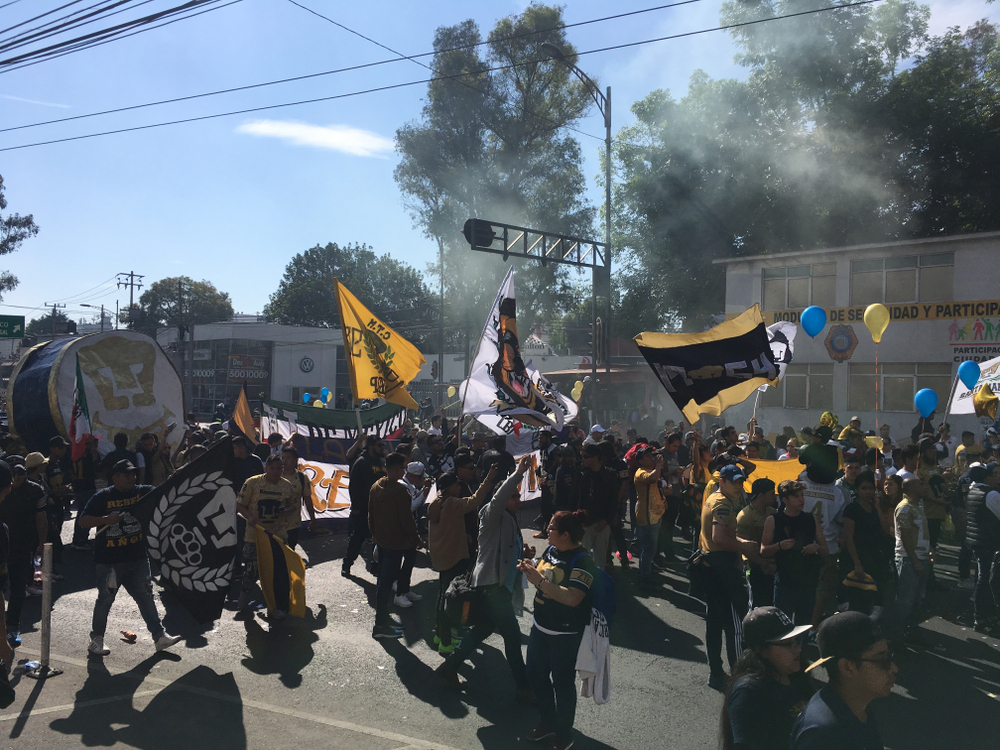 Students in Mexico marching to a football stadium before a match between two rival teams (Credit: schlyx / Shutterstock.com)
Home
Articles

On the evening of 5 March 2022, in the city of Querétaro, Mexico, fans of Atlas Football Club and Querétaro Football Club queued up to watch their teams face off against each other for ninety minutes and have an enjoyable Saturday afternoon. Unfortunately, the evening took a dark turn.

After twenty-eight minutes, Atlas, the visiting team and last-season’s winner, scored one goal. As the game progressed, the atmosphere became increasingly tense and at the fifty-seventh minute, the confrontations started. The referee was forced to stop the match as people invaded the pitch in an attempt to escape the fighting in the tribune.

Videos shared on Twitter and news platforms show people kicking inert naked bodies laying on the ground. Local authorities later confirmed that there were twenty-six injured people, three in intensive care and no casualties. As of 17 March 2022, 25 people have been detained.

Although football has existed for centuries, it was not until the late nineteenth century that it gained so much popularity. In the twentieth century, mass media such as radio and TV helped it gain even more global popularity, becoming, as of today, the world’s most popular sport.  It was with this massification that people’s passion and identification with the sport grew. Since then, many people have criticised the mass media football phenomenon and analysed its association with violence. Here, I provide a small, non-comprehensive summary.

In the first half of the twentieth century, social theorists from The Frankfurt School, a group of academics who disliked the current social, economic and political situation of the world, discussed the subject of culture as an industry. They regretted the popularisation and standardisation of culture into a commodity that could be sold in mass. They suggested that instead of incentivising free thinking and creativity, culture was just another way in which capitalism dominated the minds of individuals and made them conform with what society finds acceptable.

In a similar vein, Peruvian writer Mario Vargas Llosa claims, in a controversial collection of essays, that culture has been a victim of massification. In other words, it has been transformed to appeal to the majority of the population and lost its special character. It has become mainstream. According to him, sports have acquired an unprecedented importance which congregates millions of fans who take the sport not only as a show of skill but as an opportunity to liberate their irrationality and return to a tribal nature. People take advantage of the anonymity provided by the bench to liberate their aggressive instincts in a symbolic (and sometimes real) conquest to annihilate the adversary.

Anthropologists Archetti and Romero claim that in places where football is so important to be considered a national sport, it might be possible to observe people symbolising and reproducing behaviours that are ultimately widely observed in society. It has been argued that violent fans are usually young working-class men who feel encouraged to use aggression to achieve control and dominance—this is seen in their immediate social circles as both appropriate and desirable. The hooligans in England, the Barras Bravas in Argentina and the Mexican Porras are usually considered to be an organised group of fans (mainly young males) who engage in this type of aggressive behaviour.

Sociology researchers Zani and Kirchler analysed violence in Italian football fans. They found that group dynamics—particularly how acceptable violent behaviour is in a group’s norms—are important factors in evaluating an individual’s likeliness for aggression. Furthermore, they found that fans from worse-performing teams are more likely to engage in aggression, possibly “to claim for an image of themselves which their team had already lost”. In other words, to compensate for the ‘lack of force’ from their team.

In a UNESCO report on male roles, masculinities and violence, it is argued that there is an increasingly recognised problem with masculinity and violence. Interestingly enough, the report repeatedly suggests sport as a measure to channel violence and competitiveness to a more healthy environment. Clearly, from the incidences of aggression in sport,  it is not enough to engage men in sport. A cultural change must take place. But what can be done?

Substance consumption has been regarded by many to be related to violence in stadiums. Already in the 1980s Scotland introduced alcohol restrictions in football stadiums and England soon followed. They have also introduced membership schemes to possibly ban violent supporters from attending. In Mexico, beer consumption in stadiums is not only allowed but it is an important economic aspect of the football industry. Beer companies sponsor many teams or directly own them. Beer consumption in Mexican stadiums brings around 19 million euros in revenue per year. Modelo, one of the biggest beer conglomerates, sells more than 5 million litres per year during football matches. Without the support from beer companies, not only would the economy be affected but the mere existence of some clubs and the income of their players could be at risk.

The main narrative in Mexican media has been to stress the fact that in the Corregidora Stadium where the riot happened security was lacking. Government security was altogether absent in the arena and the private security of the stadium was clearly unqualified since they only recruited volunteers. It is clear that improving security could help stop outbreaks of violence when they happen and reduce their negative impacts, but it is unlikely that this would prevent outbreaks altogether.

To address the root of the problem, a cultural change must be made. Educational policies that recognise strong masculinity as a problem and embrace male “weakness” as a human quality to be accepted and protected should be encouraged. Discouragement of fanaticism in sports events should also be attempted. How many times has your mood changed just because your team lost? Did someone joke about it and make you angry? Remember,It is just a game, so do not take it too seriously.