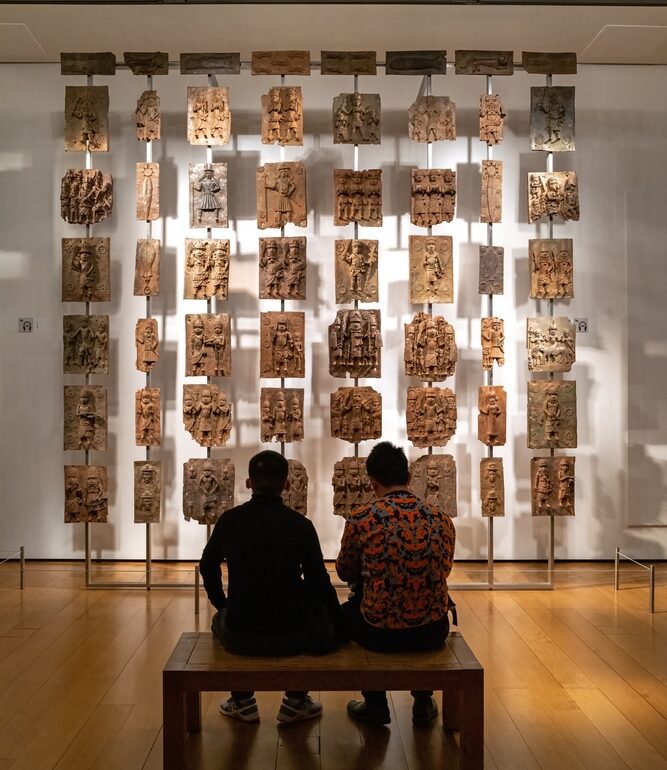 Imagine you visit the world’s largest history museum, the British Museum. In the museum’s recommended list of “don’t miss” items, you will see star pieces from all over the world. Out of the twelve “must see” pieces, five of them have disputed ownership. Although the British Museum claims that the artefacts belong there, in recent years many have been fighting for them to be returned to their country of origin.

Other world famous museums like the Metropolitan Museum of Art in New York and the Louvre, hold an incredibly large amount of cultural artefacts. Most of them are not placed on public display but instead kept in the museums’ warehouses. Some of the artefacts were acquired legally from their place of origin, through transparent deals with the official authorities of the time. Many of them were discoveries made by archaeologists, and later claimed by their nation. Others however, were forcibly and illegally removed after troop raids during colonial times, remaining disputed to this day.

The British Museum holds the biggest amount of artefacts worldwide. It also faces the most cases of requests for the repatriation of looted ancient artefacts. One of the most controversial exhibits of the British Museum is the Parthenon Marbles, which were taken from Athens, otherwise known as “Elgin Marbles”. Lord Elgin was a Scottish diplomat and Britain’s ambassador to the Ottoman Empire. In the early 1800s, he lavishly bribed local officials to turn a blind eye while his workmen ripped the statues off the temple walls. He never offered to pay for the marbles because he knew the Ottomans (in occupation of Athens at the time) would never sell, according to Geoffrey Robertson QC, author of “Who Owns History? Elgin’s Loot and the Case for Returning Plundered Treasure“. Bankrupt and despondent, Elgin sold the marbles to the museum for £35,000 in 1816. In its defence, the British Museum claims that the marbles were taken in legal ways. Half of the 160-metre frieze is in London with 50 metres still in Athens and other pieces displayed in a total of eight other museums across Europe.

Repatriation discussions started in the early 1980s when Melina Mercouri, the former Minister of culture, first demanded the marbles to be restored to their homeland. Since then, every Greek government has been in discussions with the peer British government. So far, no significant progression has been made. The hot topic has again been placed on the table as a prime priority by the current government. In November 2021, the Greek prime minister Kyriakos Mitsotakis asked for the reunification of the marbles. The modern Acropolis Museum is said to be the ideal place for the marbles, where they will be best admired in actual visual contact with the Parthenon, the monument they were taken from. The Greek side committed that the part of the British museum that hosts the Elgin marbles will never be empty of Greek treasures. In return for the sculptures, Greece is willing to loan ancient gems that have never left the country before.

However, the British response remains the same. It is not the British government that is responsible for the marbles’ fate. That, it says, is a matter for the British Museum’s trustees, a group largely appointed by the prime minister. It has repeatedly stated the sculptures are integral to the museum’s mission of telling world history. This position contradicts a UNESCO’s committee announcement which says, “the dispute over the marbles has an intergovernmental character and, therefore, the obligation to return the Parthenon sculptures lies squarely on the United Kingdom government”. The British Museum in return seems to question the involvement of UNESCO on this issue: “The Trustees want to strengthen existing good relations with colleagues and institutions in Greece, and to explore collaborative ventures directly between institutions, not on a government-to-government basis. This is why we believe that UNESCO involvement isn’t the best way forward.”

Not all repatriation talks, however, are in a deadlock. Recently, after years of negotiations, Italy returned a Parthenon fragment to Greece as a loan. If the Italian culture ministry takes the needed decision, this transfer could become permanent. Alberto Samonà, Sicily’s councillor for culture, said that this is a gesture of friendship with a very strong symbolic value. France has also agreed to return part of the frieze to Athens that the Louvre had long regarded as one of the most precious pieces in its possession. These two moves towards the marbles’ reunification could add further pressure and critique on the stance of the British Museum.

Of course, Greece is not the only country that demands the repatriation of ancient treasures. There are many other disputes over cultural artefacts possessed by the British Museum, such as the dispute over the Rosetta Stone with Egypt or the dispute over the Hoa Hakananai’a statue from Easter Island. Another one, arguably the most famous one, is the dispute between Nigeria and the UK over the Benin Bronzes.

For a long time, Nigeria has been asking for the Benin Bronzes. These include a large range of items, such as engraved ivory tusks, brass sculptures and plaques. All these items once decorated the royal palace of the Benin Kingdom in present Nigeria. Part of the Benin Bronzes can be found at the Leipzig Museum of Ethnology in Germany and the Quai Branly Museum in Paris. Most of them, again, can be found at the British Museum.

In the late 19th century, a major part of Africa was under the rule of European empires. The Kingdom of Benin, which was in Britain’s sphere of influence, did not comply with Britain’s trade demands and started a riot. In revenge, in 1897, Britain sent 1200 British troops. After carefully having taken thousands of artefacts they burned the city to the ground, as Chika Okeke-Agulu, a Nigerian art historian and professor at Princeton University, explains. As in other cases, the British Museum has ignored the requests of repatriation, following the restricted British Museum Act 1963 that prevents it from returning objects.

The whole topic of the repatriation of ancient treasures was partly sparked by a report that was commissioned in 2018. In the report, the French President Emmanuel Macron advises public museums on the issue of restitution. A few months earlier, in 2017, during a speech at the University of Ouagadougou in Burkina Faso, the French president mentioned that it’s unacceptable that a large part of cultural heritage from several African countries is held in France. He vowed to make the return of African artefacts “a top priority” for France over the next five years.

In a similar political vein in 2021, other European governments announced restitution policies, and gave items back to their countries of origin. In April, Germany said it would start returning around 1.100 looted artefacts known as the Benin Bronzes from its museums to Nigeria, beginning next year. In June, the Belgian government agreed to a plan to transfer ownership of stolen artefacts in its museums to their African countries of origin. In October, France returned 26 looted items to Benin.

Countries around the world ask for the repatriation of “their” ancient artefacts as part of their past that defines their present. They demand the treasures to be returned to the place where they were created and to the people for whom they have the most meaning. In contrast, museums all over the world, and the British Museum itself, declare the legality of keeping the artefacts as the places where the artefacts are best preserved and displayed the best way to tell the world’s history. Is it ethical? Should the items be returned? What about those that the exact place of origin is blurred or belong to former empires without a clear modern-state owner? Undeniably, the questions are many and sometimes too complicated to answer.