Chile’s Struggle for a New Constitution: observations from a divided country 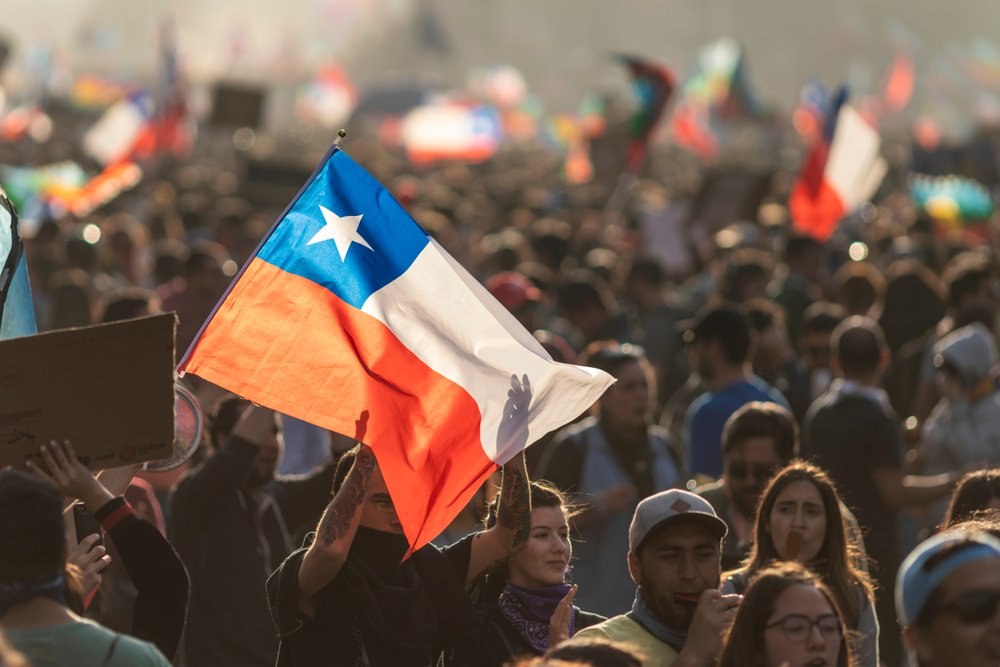 The Chilean Flag seen in one of the many protests in the capital Santiago (Credit: abriendomundo / Shutterstock.com)
Home
Articles

Feeling the tear gas in the air burning in my eyes, I understood that what was happening around me was going to be of historical importance.

Everything started on October 18, 2019, in Chile’s capital, Santiago. What began as spontaneous upheavals in reaction to rising metro fares was the beginning of massive protests against the government and constitution all over the country. Roughly three years later, on September 4, 2022, a new constitution was put to a popular vote. It included many of the protester’s demands but was nevertheless rejected by a majority of 62 percent of the population. Hearing about this I was reminded of my time in Chile in 2019 when I was travelling the country with two friends in the midst of the outbreak of the protests.

It was precisely the evening of October 18 when we landed in Santiago. We immediately went to the central bus station of the city as we wanted to go to Valparaíso, a young and vibrant coastal city close to the capital. At the station, people were running around hectically, and it felt like something was off. I caught a glimpse of a TV screen in a ticket shop, where I saw buildings on fire and angry people protesting. I asked the woman in the shop where this was. “Here, in Santiago,” she said, “No buses today, the stations are burning”.

We found an unofficial bus that took us safely to Valparíso, and felt relieved to have escaped the chaos of the capital. But shortly after people started protesting in there as well and military tanks rolled through the streets, armed with tear gas and water cannons. The normally peaceful city started to resemble a battlefield. The decision of president Piñera to involve the military and declare war against his own citizens was a shock. During these days close to twenty people lost their lives in Valparaíso and Santiago.

Again, we tried to escape the city, and took the last bus out toward the South. Sitting at the bus station, feeling the tear gas in the air burning in my eyes, I understood that what was happening around me was going to be of historical importance. I was frightened by the military fighting against its own citizens. But I was also afraid of the violence of the protesters, of their anger. This was not only about the small rise in metro fares, it was about so much more.

While Chile is one of the wealthiest countries in Latin America, it is also one of the OECD countries with the highest income inequality. The fruits of Chile’s steady economic growth were only reaped by a small and privileged part of the population. This problem was largely ignored by the government and people got more frustrated every day.

Back on the bus, after ten hours and 700 kilometres on the road, we arrived in Pitrufquén, a small town further down south in Chile, close to Temuco. We stayed for two weeks with a local family that my friend had lived with during an exchange year, two years before. Here, I spent some time with Rocío, one of the daughters of the family. She was a law student in her early 20s at the time and went to some protests in Pitrufquén. They were small and non-violent, like most of the protests in Chile during these days and weeks. She told me, “ I wanted to be part of it, of the social movement”. The family had a picture in their living room featuring former president Salvador Allende’s famous last speech that he gave shortly before his death. They told us that their country was deeply divided between people like them who were supporting the left-wing ideology inspired by Allende and the people supporting the nationalists and conservatives that were in office at that time. The latter was, in the opinion of the political left, still governing in the shadow of Pinochet’s military dictatorship that overthrew Allende’s government in 1973 and ruled the country oppressively for 17 years.

Disclaimer: Any opinions expressed in the following interview sections belong solely to the interviewee and do not represent the views and opinions of the author, the editorial staff of The Perspective, or UPF Lund.

The main demands of the protesters were a change of government and a new constitution, as the one from the times of Pinochet’s Military Dictatorship remains until this day. But today, Chile is a different country, at least politically. The new president, Gabriel Boric, a former protest leader and left-wing politician, said in his inauguration speech: “We need a constitution that unites us, a constitution that’s different from the one imposed by blood, fire and fraud of the dictatorship.”

Rocío tells me that she thinks Boric is good for the country because of his humility, youth and focus on Human Rights: “He is doing the best he can do to change substantial problems in Chile, but like any process, change is slow and this tends to make people think that he is not doing anything”.

The proposed constitution was not directly laid out by him or his government but by 154 democratically elected members of a constitutional convention. Rocío says: “I think the best thing was that it was created by people elected by us and who were not necessarily politicians; many were ordinary people who wanted to contribute to society.”

The proposal entailed most of what the people had protested for and demanded for years, but still, it was rejected by the majority of Chileans. Rocío tells me that she feels sad about it: “Part of me thought that everything that we have been through these years would make people decide that it was a good constitution. But if the result was not what the people of Chile expected, it must be accepted.”

Features included in the proposed constitution were for instance indigenous rights, the right to abortion, and universal health care. The left-leaning tone of this proposal was considered too progressive by many, and Rocío says she thinks the Chilean media influenced people too much: “The media fought for the ‘rejection’ option to win, and many fake news were created to make the uneducated population vote for that option. […] the ‘campaign of terror’ spread by the media, made it difficult to win the ‘approve’ option.”

Lastly, I asked Rocío whether she thinks it is possible to unite Chile under one constitution that everyone can agree on. She says: “Honestly, I don’t think it’s possible to unite all of Chile considering how polarised our country is regarding left or right.”

The process of finding a new constitution will continue but it will remain a difficult journey. Chile is still deeply divided. Between the rich and the poor, and between people like Rocío and her family who want change and the conservatives and nationalists who are scared of it. Chile has changed a lot since I visited the country in 2019 but it remains to be seen if people’s demands will not only be heard but also constitutionalised in the future.