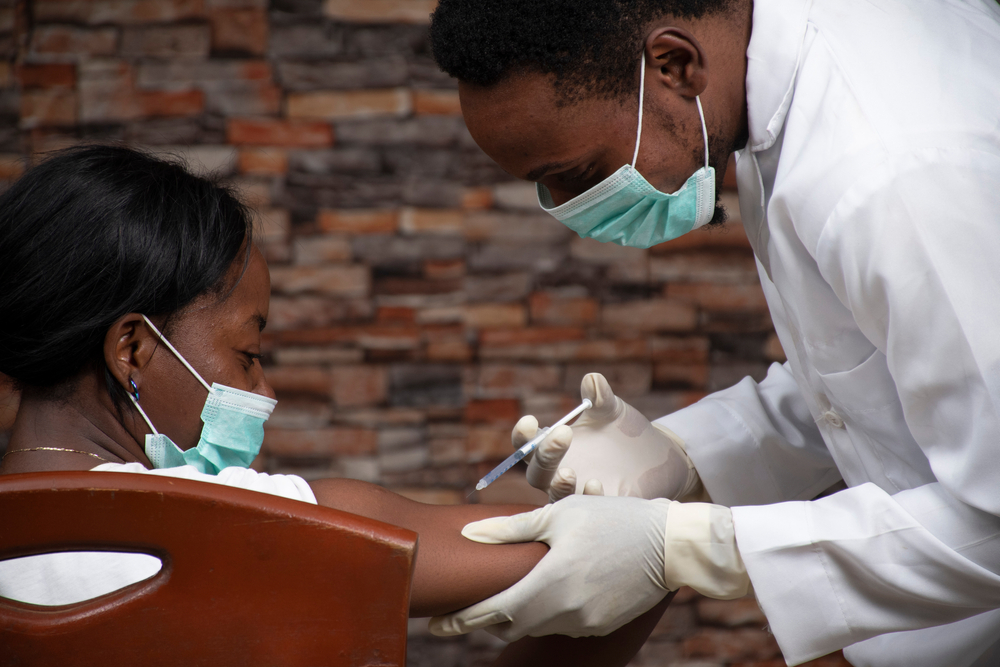 Vaccination is still the most effective measure against severe consequences of a SARS-CoV-2 infection (Credit: i_am_zews/ Shutterstock.com)
Home
Africa

“Teamwork makes the dream work”. This common saying might as well have been the motto for the South African consortium formed with the intent to address the lacking vaccine rollout across Africa. The WHO had called out for able companies to host an mRNA technology transfer hub. This hub is meant to serve all low and middle-income countries around the globe in producing COVID-19 vaccines at scale and according to international standards.

Making up the ‘dream team’ is the biotechnology company Afrigen, the partially South African state-owned vaccine manufacturer Biovac, and the South African Medical Research Council (SAMRAC). Two months later, in June 2021, the WHO announced that it had selected the Cape Town-based consortium to run the global technology hub. The selection of the consortium represents a milestone for a continent that imports 99% of its vaccines from outside of Africa. The low vaccination rate on the African continent reflects the negative consequences of being heavily dependent on external supply. At the time of this article’s release, about 20% of Africa’s population has received at least one dose of a COVID-19 vaccine and about 15% are considered to be “fully vaccinated,” according to Our World in Data. Most African countries rank at the lower end in worldwide country comparison of population vaccination rates.

While in other parts of the world, the discussion about the fourth dose has started, Africa has decided to take their future into its own hands. In February this year, shortly before the European Union and African Union leaders met for the EU-AU summit in Brussels, Afrigen announced the first significant breakthrough in their vaccine development research. The biotech company has decrypted Moderna’s publicly available mRNA COVID vaccine sequence to develop the first patent-free mRNA-type vaccine on the African continent. During the press conference, Petro Terblanche, managing director at Afrigen, reinforced that it was not a ‘copy’ of Moderna’s vaccine; it was an adapted version.

Moderna’s vaccine was chosen because the company pledged that it would not file for patent litigation against anyone using its data. At least, not during the pandemic. Moderna, as well as Pfizer and BioNTech, have rejected the WHO’s initial request to share their technology.

On 17 and 18 February 2022, the heads of government of the member states of the European Union and African Union came together for the sixth EU-AU summit. This time was supposed to be different, and by all means, it was. A pioneering spirit was in the air when Charles Michel, President of the European Council, presented his remarks following the summit. In his speech, Michel emphasised the outstanding teamwork mindset that steered the preparation and conduction of the summit. All essential topics were brought to the table, with no limits set. He spoke about a “joint vision for a renewed partnership” and a “collective African and European intelligence in action.”

The Perspective has recently reported on China and Russia’s increasing economic and political influence on the African continent. Both eastern states have intensified their partnership with the African Union over the last years, which is perceived with utmost concern from a European point of view. Various difficulties in the past have strained the relationship between the EU and AU, but with this year’s EU-AU summit, it has become clear that the EU has ambitious plans to rectify that.

The outlook of Africa’s vaccine programme appears to be bright in the light of the European and African Union’s plans to strengthen their teamwork. It provides a reason to believe that the EU will keep the commitments it made to delivering at least 850 million vaccine doses in coordination with African Vaccine Acquisition Task Team (AVATT) and the Covax Facility. In addition, the EU restated their support by mobilising €425 million to speed up the pace of vaccination, supporting the distribution of doses, along with knowledge sharing and training.

Concurrent to the summit, the WHO announced the first six African countries that will receive the technology needed to produce mRNA vaccines delivered through the technology hub in Cape Town, together with a network of technology recipients. The EU and AU have again underpinned the importance and urgency of WHO’s contribution in battling the COVID pandemic on the African continent.

Detached from the triple-power teamwork set off by the EU, AU and the WHO, the world can witness what political willpower alone can induce. The Caribbean country of Cuba is perceived as a star among lower-income countries fighting the COVID crisis with its domestically developed COVID vaccine. Cuba’s government decided early in the upsurge of the pandemic not to rely on the WHO-backed Covax program to provide the required immunisation. Instead, the ruling (Communist) party prioritised the development of a home-grown vaccine. Today, Cuba can present five COVID vaccines at different stages.

Deemed as the critical driver behind Cuba’s success story is its prestigious biotech sector, which has historically always been a focus of the Communist party. Since the 1980s, billions of dollars have flowed into companies and research programs in the sector, earning Cuba a track record of eliminating various diseases among their population. With the upsurge of the COVID pandemic, Cuba’s government understood the importance of succeeding in their COVID vaccine development endeavours early on. Failure would have shaken one of their claims to political power.

After all, Cuba’s decision to waive the WHO’s support and instead pursue their own political ambitions seems to have paid off. 94% of the population in Cuba has now received at least one shot of the regulatory agency authorised COVID-19 vaccine types “Soberana” or “Abdala” and 87% are considered fully vaccinated, according to Our World in Data. On 6 November 2021, medRxiv published a preprinted, not yet peer-reviewed, article reporting an 92% efficacy of administering two-doses “Soberana 2” in combination with a third dose of “Soberana Plus”. The efficacy of a three-dose schedule of “Abdala” has also been reported with a 92% efficacy. This being said, a lack of information made available to the public on both vaccine types has been criticised. “Soberana 2” and “Soberana Plus”, produced by the Havana-based Finlay Institute, are currently part of the WHO evaluation process.

The COVID pandemic has confronted every country with a tremendous task. Those with poor starting conditions and ill-equipped in countering the pandemic have suffered the most. Cuba’s previous investments in the biotech sector and the government’s willpower proved fruitful in their vaccine development efforts. In contrast, the African countries were worse off. Almost complete dependency on vaccine imports left the continent with the lowest vaccination rate in the world.

But Africa’s fight is not over until the international community throws in the towel. The African Union, European Union, and the WHO are now joining forces to come back stronger than ever, ready to win the fight against the invisible enemy. Their teamwork and political willpower have already recorded small victories. If the magic trio continues their strong collaboration and sticks to their commitments, the African continent may one day become just as independent in its vaccine production as Cuba is today. There are reasons for high hopes.